So last Saturday, James and I went to WonderCon. ...and it was pretty awesome. There were tons of booths full of comic books and nerdy things like action figures, tshirts, pins and button, art, you name it, it was there.

There were people in costume everywhere -- from Watchmen to Star Wars, Serenity and Firefly, Batman and Robin, the Joker (Heath Ledger version and Jack Nicholson), and loads of other characters I really had no idea who they were. 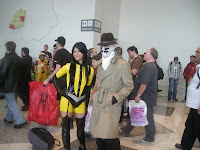 We had a great time walking around the floor of the convention and getting free stuff! Then we went up to a ballroom for the Watchmen panel. We got there about 3 minutes before it was set to start and were lucky to get to two seats together. Later, I heard that they turned 2,000 people away at the doors! We lucked out! Zach Snyder was the first guest to come out and he spoke for a while about adapting the graphic novel to film and how they explained the alternate-universe the story takes place in *(example: Nixon is still president in 1985, serving his 5th term, and Reagan is set to run at the end of the movie). Snyder explained that they tried to introduce the differences in the open credits sequence, and then went on to say that they had the clip and would show us. Boy did they ever! We saw the first 20 minutes of the film and a clip from much later in the movie. I would have to say it was some of the most stunning and visually amazing footage I have every seen. Not to mention they obviously stuck to the graphic novel almost 100% with dialogue and actions. The opening credits were awesome! If you know the characters and the graphic novel, you'll get some of the scenes. Rorschach as a child with his prostitute mother; Dr. Manhattan filming the footage of the men on the moon; Blake (the Comedian) on the grassy knoll after Kennedy gets shot; Veidt at Studio 59 (correct me, James?) talking to David Bowie; Silhouette kissing a woman at the end of WWII; and so many more...they left a few out as well, Snyder told us, like The Comedian raising the flag at Iwo Jima...by himself. BAMF.

Zach also talked about why they didn't go with a big name "Ocean's 11" cast, and even made a few remarks about how he spoke to Tom Cruise but "Didn't know what to do with him" and "Tom had Valkyrie"----instead, Snyder chose actors, not names. Personally, I think it was a really great choice!

Then the panel came out--almost all of the main characters except for Matthew Goode (Ozymandias/Veidt). Jeffrey Dean Morgan was probably the actor that I was most excited to see. He's been on and off Grey's Anatomy and had a supporting role in P.S. I Love You, and was in the Accidental Husband, which I didn't see. He was asked if he would keep taking roles where his character dies...


and then this--which was hilarious!

Here, he talks a bit about playing the Comedian--a character few might identify with or even remotely like!


The one thing that really surprised me was what Jackie Earle Haley's (Rorschach) voice really sounds like! Here he is in an interview:

and here he is narrating the trailer:

And---I saw it last night on IMAX. It was awesome. They changed the ending from the graphic novel, not really changed, but tweaked. They kinda had to though, if you've read it, you might understand. The direction was beautiful. The characters were amazing. I can't wait for the Director's Cut which is being released in July!


We also saw 3 other panels!

"9" which is an animated film coming 9/9/09. Elijah Wood was there as well as one of the main animators. I like Elijah Wood, ever since Flipper, he stole my heart. Yet after I saw Sin City, I just haven't been able to see him the same way again. During this panel, a few kids asked him questions, and he answered them using very large words and even I had trouble understanding him fully. But he's a nice guy and this looks like a great, dark animated film.

We also got to see tons of clips from the new Disney Pixar film UP.

This film looks so cute. I have to see it. Most animated films I pass over these days, even if I like the trailer, simply because the action adventure real films seem more important. But UP looks promising. I am super excited.

And finally, we waited for the Terminator: Salvation panel, just to see if Christian Bale would be there. He was not. But McG was, and he was INSANE.

McG is the most entertaining director I have ever seen. He used massive amounts of profanity, jumped up on the panel table to incite the audience, called Christian Bale's home phone and left a message that ended with: "You're f*cking dead to me. See you next week.", and he actually asked the audience their opinion on various things that should or should not be in the film...INCLUDING...the Governator himself. In fact, he hinted at it so much, saying this was the rise of *Forgive me I don't know the name* Arnold's model of machine, that wouldn't it be incomplete without him in it? hmmm...

While I have only seen most of Terminator 2 (said to be the best one, with Terminator 3 being pity-liked), this looks like an awesome film. Of course, anything with Christian Bale is an awesome film, because he's a effing professional.

The interviewer asked McG to comment on the Christian Bale blow up that happened on set, and he said he would answer it after the next clip played. Hmm, he never did.


All in all, I loved WonderCon--except for missing the Star Trek panel (the new film is directed by J.J. Abrams, the co-creator of LOST!). I really want to go to ComicCon in San Diego because it is said to be a million times bigger. It had a Dharma Initiative booth last summer as well as way more nerd booths and panels and stars!

This summer I am SO going! Anyone with me?
Posted by Hilary Castles at 2:13 PM

Wow! Ok so it sounds like that maybe wasn't as dorky as I first judged it to be. And it was really cool that you got to meet all those people!

A Dharma Initiative booth at Comic-Con? I think I'm in! Hahaha. Maybe we would even run into Seth Cohen?

Studio 54 was the club, and I can't believe I missed David Bowie hmm I guess I will have to see it again. And we are so going to Comicon BOOSH!

thanks James, I'll change it!