On my trip back to home for a week and a half, I found myself missing Louisiana! Impossible! Right? Well..no.

So I arrive at a gate somewhere in the 50s, go to McDonald's because, guess what, Delta charges for food now, and call my mom asking her to look up what gate my connecting flight is on. It was an Alaska Airlines connection, so I figured it was somewhere in my terminal, but I had no idea where I was. It was 7:20. My mom informs me that my flight is in Terminal 3 and that I am in Terminal 5. She tells me to pack up my food ( I hadn't started eating ) and get to the gate first. I pack up, ask an airport attendant where to find Terminal 3, and head on my way. THE GREATEST THING ABOUT LAX is that you have to go through security again if your connecting flight is in another terminal. Genius. So I go outside to where the Taxi's are and walk by Terminal 4 and then go into the one after it, presumably number 3. I go into the Terminal and see half of South East Asia standing in the ticket lines. I mentally note that there seem to be a lot of foreign airline ticket booths in the terminal. I start to think I am in the wrong place, but low and behold I look up and see my flight, Alaska Airlines 721, departing 8:55, top of the list on the departures. Kinda weird that all the flights following it are international flights, but I shrug and continue. I go through the International security line, get glared at for not having a passport (I'm flying to San Francisco, I said), and briskly walk to my gate, Gate 123B. Half of Mexico is standing there. I realize there aren't that many Latinos in Louisiana, not compared to California, and maybe my radar on ratios is off, but still, I find the situation odd. I go check the Departures television and can't find my flight anywhere. I go back to security, see a departure television there, and see my flight again. 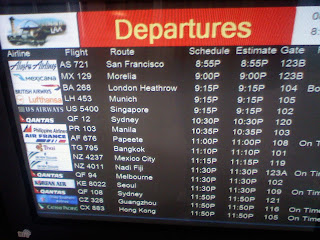 123 B. I go back to the gate and hear the announcements in Spanish. Odd. I call my mom and start panicking. She tells me my flight is at gate 31 A. By this time it is 8:30 and I am certain I will miss my flight. I go to the desk at Gate 123 B, and talk to the representative, who is latino. He tells me Alaska Airlines does not come to this terminal, and that it is in Terminal 3. I shake my head and ask, "This isn't Terminal 3?" Realizing that only in a dream world would the terminal before 5 be 4 and the one before 4 be 3. "No, this is the International terminal!" And I curse myself and Alaska Airlines and think, "No shit!" I briskly walk, because I don't want to be one of those people who runs, out of the terminal, out onto the street sidewalk, and down the walk to T3 Alaska airlines. I go inside, go to the ticket booth, because surely at 8:48 I've missed my 8:55 flight. I wait behind a woman who is bickering with the attendant about her bag, which is too big to take on board, but she is too late for her flight to check it. I stand restlessly. The attendant leans sideways and asks, "Can I help you with something?" I reply slightly annoyed, "I am missing my flight right now." She kindly asks, "Where are you going?" San Francisco. She asks if I am checking a bag, I say no. She says, "Run." After going through security AGAIN, I run through the terminal, shoes in my hand, pants falling down, belt around my neck. I get to my gate and see that no one is boarding the plane. All the seats are full and there's a line at the desk. I ask some guy what is going on. He replies something about Miami. I shrug and sit down, annoyed that I let myself actually run. While boarding the plane, I hear a couple complaining to customer service about having done the same thing I did. "There's nothing we can do, sir," the attendant replied. The man was very angry. I was too relieved to be angry. I get my aisle seat, talk to the women in my row and relate my story, and we commiserate about connection flights and LAX. I read The Gunslinger from the Dark Tower series, and eat my McDonalds as we wait on the tarmac another hour because of the fog at SFO. During the flight, we linger over Big Sur because of the fog. When we finally land and I get my luggage, it's 12 a.m. As my mom and I leave to go to the parking garage, I run into a high school friend, Kurt, who is so tired from traveling he can't even remember where he came from. I almost felt the same way..more like didn't want to remember. If you ask me tomorrow about LAX, I will reply with some offhanded joke about a sport with sticks.
Posted by Hilary Castles at 10:06 PM