I am so overjoyed that Mae is going to be on tour again, and coming to New Orleans the week after my birthday! So I decided to write about how amazing they are.

I've been listening to Mae since freshman year of high school (circa 2002) when my friend Tony sent me one of their tracks, Summertime. What caused me to fall in love completely? UM...the catchy guitar and the pretty piano in the background. The piano will get me every time.

Then I got my hands on their album The Everglow, which was in itself, something completely different from their other stuff, at least to me. This album is a storybook, a journey, and a complete masterpiece, from the prologue all the way to the epilogue. I have had a love affair with each and eve

ry song, starting the moment I bought the CD and continuing on even now with "The Sun and the Moon" (which could be my wedding song someday).

If I couldn't emphasize the magic of this music enough, I have to tell you about their shows. I've been to two. The first one I went with Christian, and we were really there to see Relient K. We got there late and frazzled, having to take a cab to the Fillmore since the bus was being retarded. We saw the last few songs of Sherwood's set, and then Mae. It was simply put, magical. I was in the back, and I still felt the entire emotion of the crowd change as people stood there and had some great inward experiences with the music. When Relient K came on, it was just icing on the cake. (They were pretty fantabulous as well, but that's another blog post. Sadie Hawkins Dance, woah!)

When I saw Mae this past spring, it was at Bottom of the Hill, a much smaller venue than the Fillmore. I had been there before, and knew it was going to be cramped. When Mae took the stage, everyone crowded around the small, 3 foot tall stage. Dave Elkins, on vocals and guitar, really has a great presence on stage and a performs almost perfectly live. For this particular tour, they had videos for each song that "aesthetically" went with it (Cause a rumor I heard is that MAE is acronym for "Multi-sensory Aesthetic Experience."). Walking away from that show, I had a natural high I had never experienced before, but similar to the one I felt about Ryan Adams at the Zellerbach.

Their album after The Everglow, Singularity, is very different than its predecessor. At first, I did not enjoy it that much. But having it in my iTunes library for a while now, I find myself listening to it more and more. The mind only has a capacity for so much that's familiar, I guess. I really love some of the songs on it now. A lot of fans criticize it though, because the sound is so different from what Mae had come out with before.

Their newest venture, Morning & Afternoon, 2 ep's that are being released over the course of this year, are quite different as well. The songs have that Everglow magic to them, but have a different lyrical substance. Their Morning tour (which is what I went to) and song proceeds all went to building a house for a woman in need in their home state of Virginia. As of June 1st, I believe the woman and her family have a brand new house, thanks to Mae and Habitat for Humanity.

If you haven't listened to Mae, you should definitely check them out. They have a great range of music out now, over the course of 8 or 9 years, and there's probably something in there you might enjoy.

(or pretty much the whole album, start to finish)

From Destination: Beautiful
(this is their first major album, I think)

"Giving It Away" (But I like the raw version on the Destination: B-sides cd they released after this one)
"Sun"
"Summertime"
"This Time Is The Last Time"
"Embers and Envelopes" 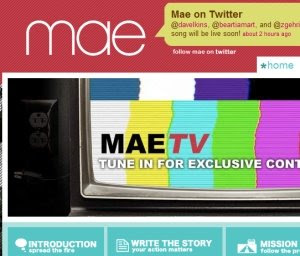 Posted by Hilary Castles at 2:53 PM