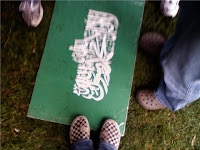 This is me, stepping on the Hamas flag. Well, just my toesies.
I went to a protest at SF State a week or so ago. The idea was if you signed a petition against Hamas you could throw shoes at their flag. Hamas being a recognized terrorist organization. Quite a few Palestinian and Muslim students objected because Allah is written on the flag. BUT the College Republicans at SF State won a lawsuit against the school for being kicked off campus for stepping on the flags two years ago. If you want to read more about this event, go here. Two people were arrested for various acts against the peaceful protest of the terrorist organization. There is also video:
I am not in the video, put I did witness the second assault on the canopy, as well as the discussion that guy had with a SF College Republican about 15 minutes before he went crazy. Also, when he charged the canopy and about 4 college police got him, he started screaming, "I'm a disabled veteran!"


There will be a similar event in the coming weeks, substituted with an Al-Qaeda Flag.
Posted by Hilary Castles at 8:22 PM