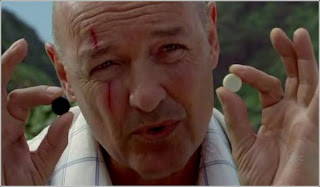 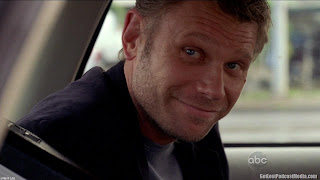 JACOB! I love him! It can't be decided if he is good or evil, but I like him better than the other guy? The other guy? Listed as "Man #2" and probably "Samuel" on the casting call sheet. Let's refresh, shall we? 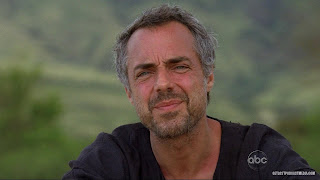 Locke says in the 2nd part of the Pilot episode:
[talking about Backgammon, a game he is playing with Walt]
"Two players, two sides. One is light, one is dark." 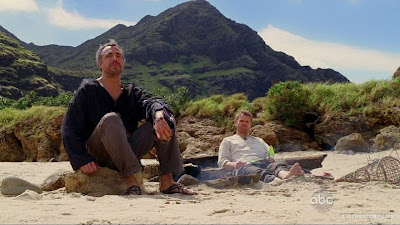 Two guys, one wearing dark, one wearing light, and I'm pretty sure they have a beef with each other considering the man in the dark wants (and just might have succeeded) to kill Jacob.

So who is this man? Is he even a man? There is much speculation. Many have taken to calling him Esau, Jacob's (from the Bible) older brother (fraternal Twins). Based off of Esau's Wikipedia biography, he could fit the bill. Someone also said since he was cast as "Samuel" it could be a hint at "Samael" which is, in some Angelic Lore (which I am, in my own right, well versed thanks to my obsession and my novel), the destroyer, the angel of Death, and someone mentioned, the patron of Esau, though I don't know where they got this. Samael is not good news, which is an argument that Jacob could be good and the other dude, evil. Other speculations is that they are constantly warring with each other, playing a "Game" to see how the humans will react. Clearly, or at least in my opinion, Jacob wants to prove something to this guy, and the guy hates him for it. It seems he just wants to end it all--by killing Jacob. Yet he can't for some unknown reason.

Many also think that because of his smoky hair and "dark" nature, that this fellow either IS or is associated with Smokey, our lovely resident monster.

Clearly, this foe of Jacob's can do something with dead people. He became a form of John Locke and impersonated him, while Locke's body was still intact in a crate. Loophole? Um? INSANITY? This is a big deal and a big mystery for many reasons. Old Smokey has been around while some characters have seen dead people...Mr. Eko seeing his brother Yemi, though I think we can safely say he knew it wasn't his brother...and Ben seeing his daughter. Is Smokey making this manifestations? I don't know. But it's odd.

Also--Jack's Daddio, Christian Shepherd. He has been parading around the island speaking "On Jacob's Behalf". Is this true? Well, Jack found his casket and there was no body. So is he really working for Jacob? Maybe. Food for thought.

Something I really need to say is this: LOOK! 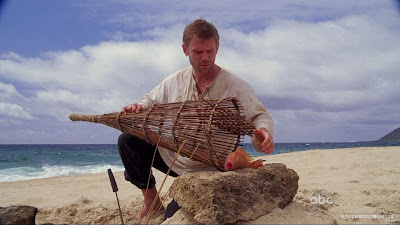 That fish that Jacob is going to slice up, cook, and eat? That's a Red Herring, supposedly. As a fish, it could be tastey, I don't know...but as a literary device, a Red Herring is something that diverts attention away from the real issue at hand. Believe me, he wasn't just eating the catch of the day, it is symbolic and there for a purpose... BUT WHAT IS THE MISLEADING CLUE?

Could it be that the whole time we thought the war would be between Ben and Widmore? Or that we kinda sorta thought Jacob was the bad guy? Or he is the bad guy even though he is dressed in white? Or he's not really dead? AHHHHHH!!!!!! We could think about it all day!

My take on it, because it's no co-in-kee-dink that his name is Jacob and "God loves you as he loved Jacob." 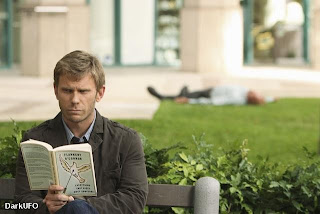 ****Jacob could have stopped Ben from killing him. But he believes that human beings are essentially good and that the Losties returning from 1977 will stop "fighting", stop "corrupting", and unite for a general purpose. Jacob is like a Jesus character, like Aslan in the Chronicles of Narnia. Ben is like Judas. Jacob sacrificed himself, and he will return on the 3rd day. Okay, probably not, but perhaps he just needs people to be loyal to him, like Dumbledore. Clearly, this war between him and the the Foe (or the Foe's master, who knows) has been going on for a long time. None of it explains the ancientness of the island or the statues that are either of the Fertility goddess or the god of Righting Wrongs (ehh Jacob?). ***********

Okay the asterisks were pointless, this is an unorganized rant.

To continue, Jacob has touched all of our main Losties, but not all of them BEFORE the crash. He touched Hurley and Sayid after the crash. The scene that flashed back of Juliette was important to show that Jacob never touched 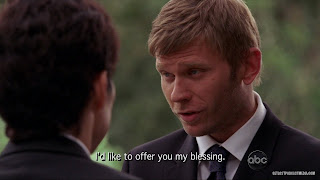 her--meaning she isn't meant to come back in his "Dream Team." So she's a goner. DEAD.

Is Sayid dead? Who knows? I doubt it since Jacob touched him. The war is coming. Who's side will you be on?