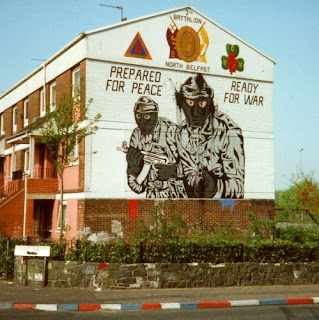 ...for a few minutes. Thought I would share these two tidbits from the last few days of readings (All from the 1970s):


‎[listing different forms of segregation in Northern Ireland] "In a Protestant pub the only Catholic present is likely to be the bartender."

[lists different ways leaders have tried to fill the gap between Protestants and Catholics] "Some other leaders in Northern Ireland mentioned the possibility of chess or bridge to bring the people together. But chess and bridge are not, to any great extent, the pursuits of working class people."

Yeah, and playing a good game of chess is gonna resolve decades of official government sponsored religious and political discrimination. LET'S GET OUR BRIDGE ON AND DISBAND THE IRA.
Posted by Hilary Castles at 12:55 PM