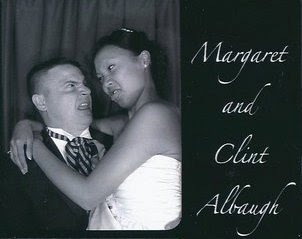 May 29th, 2010
After days of overcast, cool temps, and even rain, the sun peeked out and warmed up McArthur for the big day. With the fabulous rehearsal dinner the
night before [Margaret's family cooking some delicious Chinese food], I was looking forward to the late afternoon ceremony and reception. Knowing my cousin, I was interested to see what he and Margaret had planned. By the time 4 o'clock rolled
around, people were still arriving and we [my family] were sitting in the front row with the sun beating down on us. My Aunt Lisa had a bottle of sunscreen and was thinking about offering it to others while she fought for the seat next to me with her daughter, Mary Kate [10 years old]. "Why don't you go sell your sunscreen?" M.K. whined. My Uncle and cousins were the valet parkers, as the wedding was up on a hill of the Albaugh Ranch. When the wedding finally commenced, I was disappointed with the lack of a wedding dance [c'mon, it would be pretty fantastic to witness one!], but loved the elegant entrance of Clint, my Aunt Elena, Uncle Steve, and the rest of the wedding party [including my cousin Trina, getting married in August in the same place]. Margaret's entrance was pretty awesome though, riding up in a vintage La Salle [pictured below], and being led down the altar by her wonderful mother, Gene. 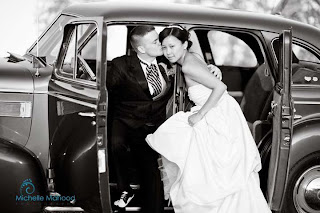 The ceremony was presided over by Margaret's high school basketball coach and was classic [minus any religious affiliation] to the dot. Their vows were what I would expect from them; personal, humorous, and full of love and respect for each other. 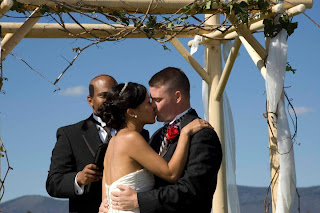 Their first kiss as a married couple. *cue "Love Story" by Taylor Swift*. Because my cousin is pilot in the Air Force, he got an Arch of Sabers:

Traditionally the bride and groom walk through the arch of swords. That passage
is meant to ensure the couple's safe transition into their new life together. The guys on the end threw their swords down and demanded a kiss for them to pass. It took not one, or two, but three kisses for them to let Margaret and Clint down the aisle. 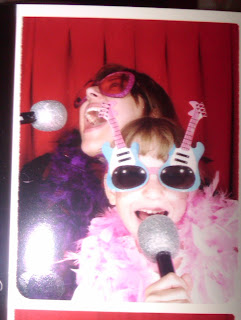 While the 300 or so guests hit up the receiving line, I discovered the sangria and the photobooth! There were two booths and a table of costumes and props for the guests to take pictures and put some in the wedding guest book. It spit out a page with 3 pictures on each side and "Margaret and Clint Albaugh [line] 5.29.10". Mary Kate and I visited the photobooth many times.

The guestbook turned out so cute. One of the more memorable messages [and the writer will remain anonymous, you know who you are]: "Costumes can come in handy".

When the dinner had been eaten, the toasts had been made, it was time for the first dance. After that came...well, what do you get when you mix a well stocked D.J., a dozen or so military men, a beautiful woman, and a keg truck of beer? 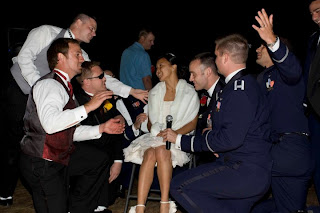 which is of course a nod to this:

Overall, the wedding was beautiful, went off without a hitch (to my knowledge) and allowed me to see a lot of my friends and family that I hadn't seen in a while. It was really just part one, since Trina is getting married in August, same place, only bigger! I'm a bridesmaid in that wedding, and I can't wait to celebrate my cousin's big day, on her birthday!
Posted by Hilary Castles at 4:34 PM

Let's Join With Us

Ha-ha! They are so cute. The pictures came out really good. This post is giving me a chill feeling as I am also getting hitches this year. I am excited about my wedding but slightly nervous. I want my wedding to happen in one of the outdoor LA event venues like this. It looks so pretty here.