Over the Terrible Teens, Burn After Reading

Yesterday, (10 minutes ago) was my 20th birthday. I don't feel older, not at all, but I do feel more at ease when saying how old I am. Since July, when introducing myself, I've been saying that I'm 20. It just seems and sounds better than "nineteen".
I'm so excited (slightly sarcastic, yet not completely) to read this:
Real Life, Real Love: 7 Paths To A Strong, Lasting Relationship 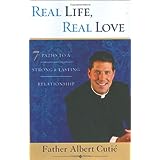 This being one of the delightful gifts my mom gave me for my birthday. She spoils me, really. This ties with an IPOD stereo. But really, I read the introduction and this seems like a great book. It even comes recommended from Shakira and Andy Garcia. Father Albert Cutie' is Floridian with his own television show, radio show, and weekly column. I'm interested to read his advice. Hopefully it will be easier to follow than Dr. Phil.
This past week I've been ever researching colleges and application deadlines, and as I was searching for University of San Diego (Catholic) otherwise known as USD, I came across University of South Dakota. It looks like a nice school...and I just might apply there with an out of state tuition cheaper than some in-state California Universities at a whopping $4000. As a History major, I don't really need to choose a school based on the programs, although they are important, however, it's not as important as a school of Engineering. My choice of school should be more about what campus and campus life will fit me. Sarah, you have 5 sentences to convince me of Louisiana's appeal. The fried okra alone, but then there's those silly hurricanes and the humidity!
Speaking of Louisiana, HBO has this wonderful new show called True Blood set in small town Louisiana...

It's about vampires, which I love. It's a bit racy, then again it's HBO, but I love how the show makes fun of vampire/human love stories, while at the same time managing to sustain a serious drama of it's own. In the first two episodes, a melodic piano love song played every time the mortal human girl and 150 year old vampire saw each other for the first time... it was hilarious. Definitely hate the cliffhanger endings though. We're on the third episode and each one so far has had a Grey's Anatomy-end-of-season-type cliffhanger ending. Sweet suspense. Anna Paquin plays the main character, Sookie, and she looks totally different. You barely recognize her except for the gap in her front teeth. She's blonde and tan and very cute. The show is especially interesting because in the show's universe, Vampires have "come out of the coffin" and are demanding government rights. Can you imagine Vampire lobbyists? Yikes.
I'm preparing to go to the Bi-Annual California Republican Convention down in Anaheim. A few of us from the DVC club are going down, as well as other Bay Area CRs. I'm driving, hopefully with a few other people, Thursday afternoon. Saturday night's banquet offers speakers Governor Mitt Romney (R-MA) and California Insurance Commissioner Steve Poizner (who I have met! Although he probably doesn't remember me). Sarah Palin was supposed to make an appearance but she completely cancelled her trip to California! *tear*
I absolutely adore Italian Sweet Creme coffeemate. Now that college has returned full swing, so has my caffeine and coffee addiction. To save money at the expense of Starbuck's (I think they'll survive), I've started brewing coffee at home, and even taking it with me to school in a nifty to-go mug. Although the only class I need coffee for is Geography at 9:30 am, my teacher is so enthusiastic and animated, it would be hard to fall asleep. Did I mention he also looks like John Malkovich? It's very eerie. He sounds nothing like him though.
I saw the Coen Brothers film Burn After Reading on Friday night. It was hilarious. Definitely something fresh and different from the stuff coming out the past few months. I love films in Washington, D.C., and this one was all over Georgetown. It also featured very stupid people being taken very seriously. It is worth $10 to go see.  Best line of the movie (not really a spoiler):
"Report back to me when it makes sense." (Spoken by a CIA superior).
Isn't that life? :-)
finite.
Posted by Hilary Castles at 12:09 AM

Happy birthday! Did you celebrate by watching True Blood? =)

Wow! I really did laugh at loud at your last comment about the adopted British accent!

To be honest, turning 20 does kind of suck... no new freedoms or anything... just more credit card offers.

You're reading a book recommended by Shakira? Hmmmm. lol. It actually looks pretty good though.

I'm working on my Hilary-needs-to-go-to-UL case. I will have facts, figures and photos to back up my point. I will be prepared, bitch. Look for it in an upcoming blog post.

Haha.. nope I've never watched "True Blood" but I will check it out!

Well, you might be looking at colleges based on what campus life will fit you, but please DO look at cost as well! I'm glad you mentioned the University of South Dakota out-of-state tuition of $4000. I know you seem pretty hooked on Oregon State [I attended for two years before transferring] but there are a lot of schools out there with A LOT to offer in terms of programs & campus life. And the Oregon State out-of-state cost is kind of a killer especially if you'll have loans.... I know, I lived it.